There are several solutions to the head-rests when I read through the builder-blogs. Some have used head-rests from cars, other have designed their own, and some have even skipped them totally. I decided to build the plans head-rests, but soon realized that they looked too weird for me. Some have pointed out that they would fit a conehead, but not a normal human beeing. I tend to agree…. 🙂 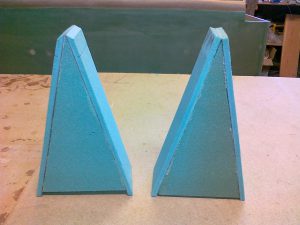 The plans head-rests looks kinda weird… but I’ve seen them with some cool upholstery in a finished Cozy and it looked great! But I decided to make them in another shape. The cool thing when working with foam and glass is that I can experiment with different solutions, test them out, then redesign if it fails. I’m definitely not sure how my headrests will be at the end, time will show! 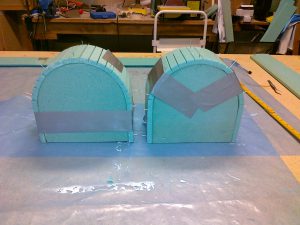 They are the same width and depth, but only 7″ high and rounded. To get the glassed foam (glass on the inside) to bend around the curved front and back I made several cuts in the foam. Then the foam easily followed the curve. I floxed this and will fill the slits in the foam with flox prior to glassing the outside. 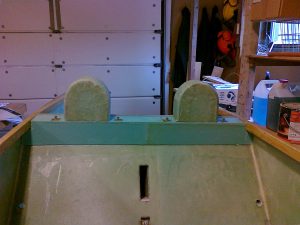 And here the head-rests are glassed on the outside as well. Two plies of BID at the front and back, three plies around the sides and wrapped down front and back. Will flox them to the shoulder-brace later