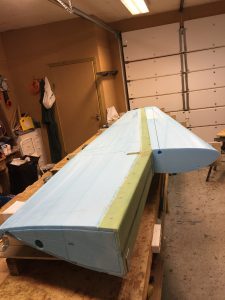 2016-07-10: Started this step by moving the wing from the floor and on top of the table. Then I flipped the wing with the jigs still fastened so that the bottom face of the wing are facing upwards. Finally I rechecked the jigs for accuracy, being certain they are absolutely straight and level before I fastened the jigs to the table. Removed the upper parts of the jigs making the wing ready for the bottom spar cap. 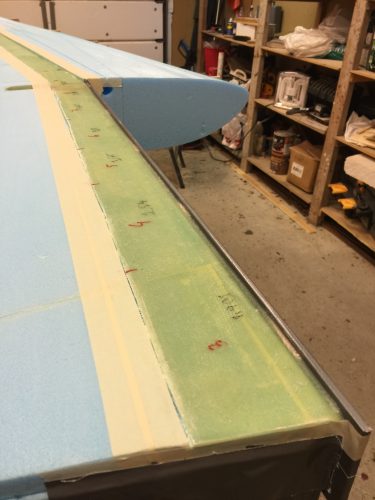 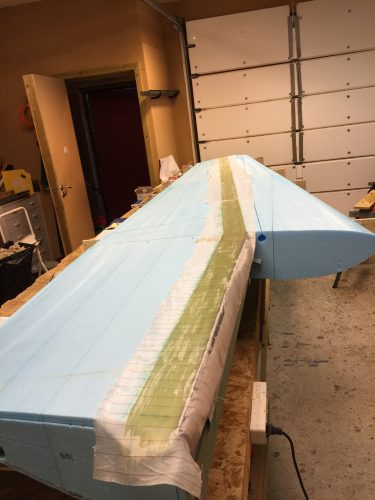 The plans says that the spar cap trough is 142″ long, ie. the three bottom plies should be 142″ long. When measuring on my wing the trough is almost 144″ long, 2″ longer. I have measured the wing in all dimensions and everything is according to the plans. I simply added a couple of inches to each ply to compensate for this.

I NEARLY goofed up this step. Here is the story, I sent this to the Cozy Group and Canard Forum:

I was doing the bottom spar cap layup on the wing, everything was prepared and ready. Put on the first ply of tape, started to roll of the next feet of tape for the second ply when I realized that I was maybe short of spar cap tape! I was SURE I had ordered a new roll of tape, so I didn’t bother to check before I started. What to do? Can I stop in the middle of a spar cap layup and continue after it has cured? It felt like bad idea – the voices in my head said: “Don’t do it!”
I immediately went on my computer started to search for terms that matched my problem, but nothing, nada.
Am I the only one facing this? Well – I decided to stop and remove the first ply while it was still wet, wipe off the epoxy from the shear web and order more tape before I started over again.
Just for the fun of it I decided to measure the rest of the tape roll I had to see how long it actually was. Remember I had already removed the first ply of 144″ of tape. When all nine plies (!) was cut to length, I had 20″ of tape still left on the roll! So – if I had done what I normally do (cut all plies before I start to glass) –  would had almost 170″ left. Well – I lost one hour goofing around on this. I went on and started over again and finished the spar cap layup in 3,5 hours.
I write this with a purpose, to get an answer on if I assumed that stopping in the middle of the spar cap is a bad idea if you run out of tape. Then – the answer will be archived for future builders if anyone comes in the same situation.
The best advice is however: Measure twice, cut once. Always be certain you have enough material BEFORE you start the job.

I got a good answer from Marc J. Zeitlin:

A couple of comments on spar cap layups:

So – I could have just continued the work, but I’m glad I didn’t. The comments on number of plies is correct. The depth of my spar cap trough was correct for the 9 plies. I could maybe have extended one ply but not more than that.
I have now ordered 100 feet of tape for the three spar caps I have left. 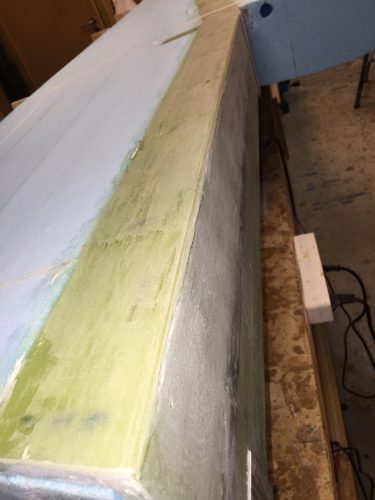 2016-07-14: Removed the dam and sanded the bondo away. Sanded a round edge on the spar cap area on the inboard part. The wing skin will go over here and down on the shear web so it’s important to have a round edge here. 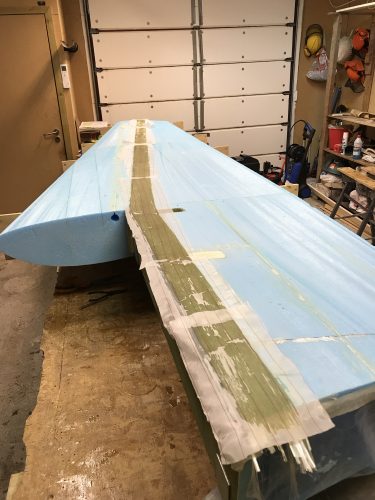