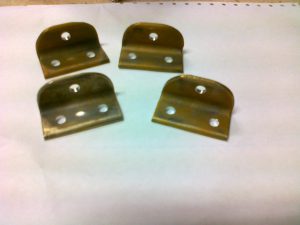 From the 1″ x 1″ alu-angle I made these brackets for the seatbelts. Drilled and alodined and ready for mounting. 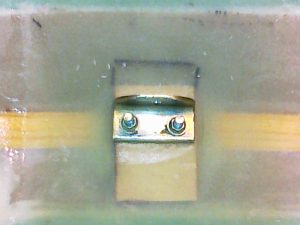 The bracket is floxed in place and the screws are tightened. I recessed the heads in the fuselage, actually counterboring through the glass on the outside until I reached the longerons. Filled the outside hole with flox.
However – I bumped into a small problem in this step. The distance between the outer fuselage wall and the top of the seat where the bracket are mounted was almost 1/2″ higher than the plans! This resulted in the screws beeing too short. I had to purchase new longer screws to solve this.
The reason for this error (minor!) is probably two things: I didn’t remove enough foam when I rounded the outer part of the fuselage. I could of course just drill a deeper recession from the outside but I didnt quite fancy that idea compared to just adding longer screws.
The other reason was that instead of fiddling around with the plywood-hardpoint to get it lay dead smooth on the fuselage-side, I just put a generous amount of flox under it, making the height a bit higher. I didn’t think about the screws at all… well, no big deal.
I ordered new screws from Wick’s since ACS didn’t have the right dimension. Wick’s was extremely quick and I got the screws sent from USA after only 4 days! Thumbs up!

As stated earlier I will not use the plans outside step, since the FHC and extended strakes calls out for another soultion.