This chapter is the most time-consuming until now. It also involves some investments in hardware such as the landing gear bow (wich I bought earlier from an other builder) and the wheels and brakes.

I will divert slightly from the plans as I will install an electric actuator to deploy the landing-brake instead of the manual solution. This is a well proven mod that is recommended by the builder-community. 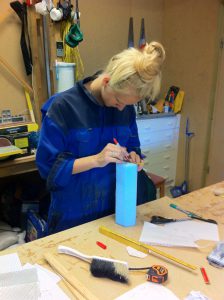 I’ve got a new helper btw. One of my daughters had a school-project and asked for help. I found that I could help her by letting her make the stuff in foam and glass. So we started out, marking, cutting, hot-wire-cutting and sanding. She did a good job and it’s good to know that I have several helping hands 🙂 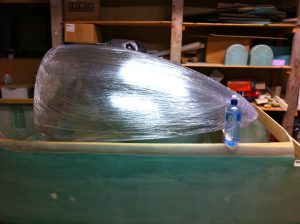 I also got my canopy from Todd’s Canopies. Because the exchange-rate between USD and NOK is in my favour, I decided to buy the canopy already now. Cool to have the canopy in house!

Update June 2016: Todd Silver, the owner of Todd’s Canopies tragically died in a plane crash. As pr June 2016 his company is for sale. Todd was a great contributor to the canard community and will be deeply missed.